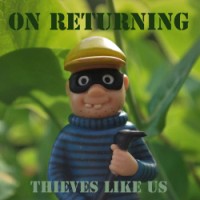 Sounds like feel good 80s indie pop music. If you’re in for an occasional timewarp back to the era of big hair and leotards, then “Thieves Like Us” by On Returning can help you out.

Thieves Like Us is composed of 8 pop alternative tracks that brings to mind New Order. Of course, it’s not lost on us that the band has the same album title as a New Order song. Whether it’s a straightforward nod or not, there’s no doubt about the influence they retained in their music. Definitely an album worth time warping with. Not much information is available for this band, except for the fact that they are from Sweden (according to their Jamendo page) and they create some good vibe 80s/early 90s sounding pop rock that will open the floodgates to a lot of embarrassing fashion faux pas, bad hair and some great music.

The band has a knack for creating deceptively simple tracks that contains catchy hooks and great instrument work. Of course, there are some tracks that could use a bit of tweaking; but overall, the album is pretty solid. It’s one catchy track after another and the guitar and bass stands out quite well.

Some of the tracks worth checking out would be “Endless Love ” which for some reason reminds me of the The Cure’s Friday I’m In Love. “My House is Not a Home” is also another track that’s worth your time.