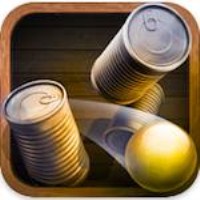 Miss going to the carnival and playing those standard carnie games? Well, here’s your chance to bring the fun wherever you are or simply satisfy your nostalgia for the old times.

Can Knockdown is the electronic version of those throw-a-ball-on-a-stack-of-bottles carnival game that you might remember playing as a kid.

The game is created by Infinite Games. The company is no newbie to the world of portable gaming, having released several games in different platforms like Symbian, PPC, Palm, and even N-Gage. For their iPhone and iPad game titles, the list includes Sky Force and Sky Force Reloaded, iQuarium, Sailboat Championship and among others.

Playing Can Knockdown is just as easy as you remember it. All you have to do is flick the ball and send it flying down a stack of cans at the edge of the screen. It’s simple and fun yet highly addictive gaming.

The levels start off easy with just three cans. As you progress, the number of cans increase and the stacks get a bit complicated. Of course, you get several shots at your disposal (five to be exact) so don’t worry if you don’t get all of the cans at first throw. The better your aim though the more points you get hence, it’s always good to polish those throwing skills.

Since it’s an iPad game, it does take liberties in adding a few special and unique touches to the traditional game. For instance, there are exploding cans that will help you topple down the stack much faster when you hit it. Other times you can get an extra ball if you hit a particular can. To add to the challenge, there is a set time wherein you have to knock down all the cans.

Can Knockdown might feature a simple gameplay but it’s highly entertaining. Even though the game might not be something you’ll play for hours and hours in one sitting, it’s definitely a great diversion to have for those little pockets of time where you find yourself not doing anything.