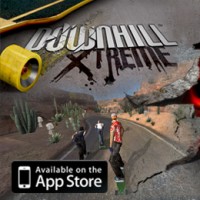 Casual games have captured the hearts of millions; they also turned many of the iPhones, iPads and iPods into some of the most outstanding gaming devices out there. So if you are one of the people who can not wait to try out another hot game on the market be sure to check out Downhill Xtreme, “world’s first longboard racing game” that just might leave you playing for hours.

Created by Distinctive Developments Ltd, this developer has proved to be an avid lover of the mighty iOS platform, producing some great time-killing titles such as, Football Kicks, Rugby Nations 09, Anytime Pool to name a few. However, it is the Downhill Xtreme that is a real step forward in the right direction.

When it comes to the gameplay, players in Downhill Xtreme roll down a series of hills from A to B, using the Gyrposcope of their device with tilt controls to maneuver the little guy safely down the slope. You can brake by tapping the left of the screen and tap on the right to tuck, which gives players a speed boost, but beware as there are also many obstacles that can slow you down or send you flying.
The controls of the game are more than just simple, giving you the best of both worlds.

The races, skateboards, character customization, tracks and environments look really neat and lend a realistic touch to it. Players experience the action in groups of three races, called ‘seasons’, and they have to first qualify before entering into the full race with three other boarders.

Overall, this game packs-in quite a punch and will keep those looking for a time-killing app very happy for quite a long time. Though the game is a free one it contains some in-app purchases, but dont worry you will be able to breeze through the first few seasons without any fuss.