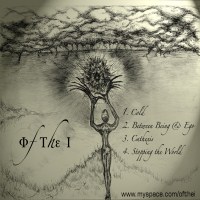 Of the I is an experimental five man band from London that’s been slowly gaining popularity in the indie music scene. Their first EP, Demo-noid E.P., is a compilation of four expressive tracks that hover around progressive rock and ambient sounds.

Earlier tracks were initially recorded in a London flat and released online to much praise from the internet community. When the first couple of songs from the EP was released as a torrent, it garnered over 12,000 downloads prompting the group to start recording their first album and hopefully aim for more. Currently, the group’s full length album, Balance Instars, is available for purchase on their website.

Demo-noid E.P. comes with four tracks that also appear on the full album. Tracks like Between Being and Ego, sound like a haunting appeal; similar to how light slowly creeps up and fills an initially pitch black room. On the other hand, Cathexis is more rock/hipster inspired. With its upbeat rockish tempo and jangly guitars, the track would definitely fit easily in mainstream rock stations.

As mentioned, these set of tracks are earlier versions of the ones released in the album, hence, it’s no surprise that the recording quality is a bit sub-par. Nevertheless, it’s enough to appreciate the sound and the music from these London scenesters.