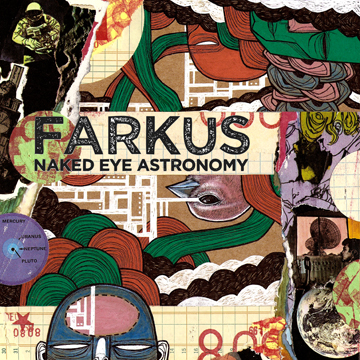 Appearing for the second time here on Frostclick is the Illinois alternative melodic rock band, Farkus. They first graced the pages of the blog with their debut album, Thought You Should Know. After receiving solid feedback and polishing their sound even further, the quartet is back with a fresh set of tracks that they’re offering for free download right here on Frostclick.

Naked Eye Astronomy is a set of 8 tracks that echo the band’s characteristic melodic altrock sound. Their music is more polished compared to their debut record but it still resonates with that hardcore rock and roll feel along with some well-put together lyrics. Expect prolonged guitar riffs, heavy drumming and some melodic rhythm to grace your ears as you listen to this one.

The songs in the album range from mellow rock to hardcore. In some parts it’s reminiscent of the Stone Temple Pilots during their heydays while on others, you’ll get a touch of 80 to 90s ballad rock.

Opening with Taken Down, the song is an alternative grunge affair with a really nice rhythm. It’s sounds like it belongs in the 90s to be quite honest, giving the song that nostalgic vibe. It’s followed by the heavier track, Uninvited Life. Here, the band showcases a straight up rock sound complete with wailing vocals and some nasty riffs. Ally of the Enemy is also one of those songs you can easily head bang and raise devil horns to.

On the other hand, Farkus also features a more gentle side of themselves in the album. In fact, when you hear This Happens Everyday, you’ll seriously wonder whether you’re still listening to the same band from moments ago. It’s a quiet, alternative folk single that sways with gentle singing and is filled with heartfelt emotion.

In the end, you get a record that is both crazy rock and roll and smooth, melodic folk rock. Surprisingly, it’s a nice mix that will make you want to listen to each song as it goes. Go ahead and grab the download. This should be a great listen.