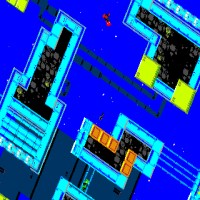 0space is a cool game that was developed for TIGSource’s versus-themed competition. This amazing game can accommodate between 2-4 players at any one time on the same PC.  It was created by Beau Blyth and definitely a game worth trying.

The game is still in its beta stages but it has been slowly gaining a solid fanbase. It only features 8 maps right now but there are plans to expand, eventually. It also gives players a good range of deathmatch options, amazing gameplay and so much more.

Like most shooter games, your main goal is to shoot everybody else and make sure you’re the last man standing. You can choose between several types of deathmatches depending on what you prefer. The game arenas vary as well. Most of the time, there will be walls to keep you guys sealed in while you’re fighting. Other times, you’ll find yourself in a completely open area, where there’s a possibility of you floating into space as you do your battle.

However, if you do find yourself floating in space, it’s possible to use your gun as a sort of propeller; ensuring that you have a safe landing. Controls for the game are basic but definitely functional. When fighting, you automatically switch between weapons depending on whether you have ammo or not. It’s also possible to carry several grenades around and blast everybody until kingdom come. Watch out though, the grenades are quite powerful so make sure you’re out of range.

In the end, the game is quite cool. It’s a fun shooter game that’s awesome to play. So gather up your buddies and see which one has the will to survive!