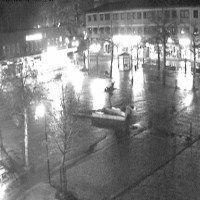 When was the last time you got excited over a screensaver? If you just said, you can’t remember, then check out Surveillance Screensaver. This amazing screensaver lets you access over 400 surveillance cameras worldwide! Everytime you look at your screen, you get to play an amateur detective or a voyeur because pretty much, you get a live feed of what’s happening in a particular area in some part of the world.

This awesome screensaver runs on a Mac OSX or a Windows and is definitely worth having.

It’s a bit addictive since every moment you look at the screen, you half expect something important to happen and don’t want to miss out.

With Surveillance Screensaver, it’s easy to get lost in a screen full of surveillance videos. Sure, some of the videos might not be updates in real time but majority of it are and it’s hard to take your eyes off from the screen everytime you are facing one. On their website, they describe it as similar to watching an “addictive soap opera.”

The program was first started back in 2007 and more than 30,000 people have downloaded the screensaver since. Michael Zoellner developed the program and according to him, it first started as a dissertation on a “Reality Filtering System.”  The very fact that people can easily watch what’s happening to something or someone across the globe is quite intriguing for a lot of people. Hence, the allure of having such a cool screensaver on hand.

Every it pops up, it shows a different video from a remote location. The location and date are indicated at the bottom portion of the screen while the latitude and longitude of the location is also displayed.

Despite its cool factor, the program isn’t perfect. For instance, many people are used to having the screensaver disappear whenever there’s a hint of movement on the mouse or keyboard, however, for this one, it doesn’t disappear. This might be a minor inconvenience for some but for others, it can become downright annoying.

Overall, it’s definitely one of the coolest screensavers I’ve seen to date. It’s interesting and available for both Mac or PC.