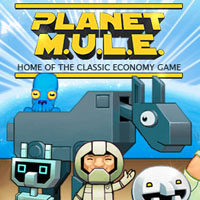 Planet M.U.L.E actually has had a long history. The original game was released back in the 1980s for the Atari 800 console. At that time, this was one of the few machines that allowed multi-player functions; featuring four ports.

Today, the game has been remade with improved graphics as well as gameplay. Nevertheless, it stays true to the classics and ensures plenty of fun times ahead. The best part is that the game is offered absolutely free and works great on a Linux, Mac or Windows system.

In the game, you play the role of a space traveler that’s colonizing a planet. You’ll need to use the planet’s resources to make money and set up your colony.

The new game pretty much retains all of the basics of the old game. It centers on a fictional planet called Irata (Atari spelled backwards) where your goal is to build up your own colony and make it work. The original M.U.L.E is  dubbed as a game exercise in the laws of “supply and demand” and this remake certainly stays true to that.

Up to four players or colonists can play at the same time. Rules are easy to learn even if economics might not be your strongpoint. It’s essential a basic game of who gets to transform or create a thriving colony first.

Among the first things that players must do once they arrive in the planet is to choose their own plot of land. Whoever presses the action button first will get the land. Of course, you have to consider the advantages of your plot land. The plots are divided as Mountains, Plains and Rivers. Each one has its advantages and disadvantages when raising particular crops or items.

Once this is set up, the notion of economics and managing your deficits takes control of the game. Although the rules can be a bit overwhelming at first for any newbie, rest assured, they are easy to learn. In the end, the player that has the most profits after the entire game is declared the winner.

Although it might not be for everyone, Planet M.U.L.E is pretty entertaining. The recreated game is pretty much faithful to the original with just a facelift to show for so it’ll still please those who actually remember the original title back in the day.