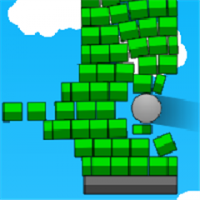 Windows Phone 7 has a very meager app choices up it’s sleeve when it comes to games, further frustrating it’s users. So for all the gaming junkies out there with a Windows Phone 7 device – check out Physi Bricks. The game takes alot of cues from Angry Birds and Crush the Castle. Yep, it is quite similar, but with an interesting and intuitive gameplay mechanism.

It was developed by Stiq Joy LLC for whom the app is the first one on the record.

In the game, players need to smash a certain stack of green bricks with various weapons provided. Sounds easy? Well, things are always not this easy as you will need to keep a good look at the obstacles, the angles, the power and the ammunition being used. There is also a circular bulls-eye board which determines the angle and a circle which is to be pulled for power. Further, the game features multiple ammos, namely, Small circular stone, Disintigrator, Implosion, Anti-Gravity, and Magnet balls.

The levels keep getting tricky with the game. So if only angle and power is needed in the first level, players will need accuracy, angle, power and timing when they move up. Basically, the game is very physics based and should appeal to the angle-junkies for an addictive gameplay.

Presently the game has been incorporated with 30 full-levels, and the developer has promised to add the next 30 levels in the coming week. The app has won very favourable responses among the users. It has become the number one ranked “All Free Game” and ranked third in “All Free Apps”. Also, the developer is very quick to rectify responses and crashes by releasing updates at a lightening speed. A thumbs-up for that.

Overall, Windows Phone 7 is a very new platform and is more of a testing zone for developers, but the quality of apps being churned out makes the future of this OS look really promising. Physi App is a great, fun game with an interesting mechanism and being a Windows Phone 7 exclusive, users should just take that as an icing on the cake.