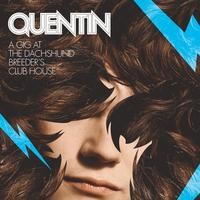 Quentin: A Gig At The Dachshund Breeder’s Club House

Quentin is a German band that spits out punk rock tracks that you might not understand but is definitely a hell-of-a-lot-of fun to listen to. This three piece German band has definitely got spunk and tons of attitude.

A Gig At The Dachshund Breeder’s Club House is said to be more than one-year in the making yet it seems to be the product of a spontaneous live performance or get together in the studio. It has plenty of energy, attitude and a touch of cheekiness here and there.

Definitely a cool 7-track compilation worth checking out. It’s a bit of pop, Brit rock, new wave and punk all rolled into one interesting and upbeat record.

The album opens up with the title track, A Gig At The Dachshund Breeder’s Club House. Yes, the title is a bit long but the track only clocks in at an average 3 minutes and 2 seconds. The vocal work makes me think of the Sex Pistols and The Cribs combined. As weird a combo indeed, but the song incorporates punk and new wave like bread and butter.

Meanwhile, Tarrot Guy, opens with the resident jangly guitars and very new wave beats. It’s one of those cuts that induces body jerky body movements (any form of it) whether you like it or not. At some point, you’ll end up tapping your fingers, bobbing your head or simply moving your upper torso side to side in an effort to dance.

In the end, these guys certainly know how to create jaunty cuts that make you want to dance. Their tracks are upbeat and even if you might think they are singing in German (they’re not!) they still sound quite good. Definitely worth checking out.

You can help out the band by purchasing their album at their website right here, or you can simply download the album for free.