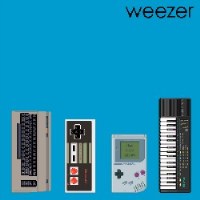 Anybody who loves Weezer AND video games should definitely download this record. UK based video game netlabel, Pterodactyl, has finally made what most geek indie rock fanboys and fangirls’ dream of without realizing it, a Weezer cover album done in 8-bit!

This 14 track record consists of nothing but the best cuts from the gods of geek rock. Main difference is that instead of Cuomo and crew’s usual chops, it’s the 8-bit sound that dominates.

If you love Weezer and video games, this is one record you shouldn’t miss out on. It’s a quirky take on some of the best Weezer singles out there, done by some of the best “chiptune talents” the label has to offer.

Although it might seem weird at first, if you’re a true Weezer geek, you’ll be smiling like a nut upon hearing the first electronic riff of the infamous, Islands in the Sun, performed through a videogame orchestra. It’s quite fascinating to make out the bits and bobs of chiptune and mentally translate it to a Weezer song.

Other tracks like Holiday and El Scorcho are also worth checking out. The former incorporates vocals but still manages to showcase 8-bit talent in parts. On the other hand, the latter is purely done in chiptune. It’s performed by Tugboat and there’s definitely no love lost from the original to the rehash.

According to the Pterodactyl Squad, “the songs on this compilation have mostly been created using original videogame hardware running home-brew software and vary radically in style, from minimal ‘one man and his Game Boy’ compositions to 8-bit inspired full band performances. Pterodactyl Squad proudly presents the music of Weezer as you have never heard it before.”

This is one tribute album that plenty of Weezer fans might actually love listening to. (I know I did) The best part of it all is that the record is available as a free download. You can bask in the glory of chiptune plus Weezer in this one without shelling out a penny.