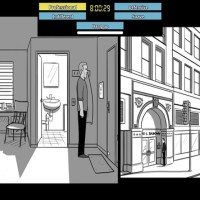 If you are a big fan of Jack Bauer and his exploits, then you might want to try out 15 Minutes, a humorous take on the hit action TV show 24.

The game was created by Tim Hengeveld, an animator, storyteller, game developer and artist all in one. It was created especially for the MAGS monthly AGS competition. The competition is open to all amateur game developers ready to undertake a special challenge of creating a game under one month, all while following the rules set by the previous winner of the competition.

In the game, you play a primary government agent who receives information of a bomb set to go off at a local coffee shop. Of course, you’re tasked to take care of it by finding and diffusing the bomb in 15 minutes.

Playing the entire game is quite fun. The dialog is great and funny so you’ll have plenty of laughs as you go along. Graphics are also very good. It’s done in a similar way as 24, where you get two comic book style panels at the same time. It is certainly a fast-paced and witty game that you’ll enjoy.

Go ahead and see what it’s like to play “Jack Brewer” and save the city from potential destruction. Grab the download by hitting the download link. The best part is that the game is absolutely free.