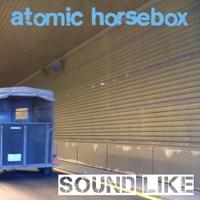 Atomic Horsebox is the pet project of German musician, Phil Noonan. Noonan is no stranger to the music industry. He can be considered a veteran, having been part of several bands like The Winchesters, Crystal Kitchen, and The Probability of the Impossible just to name a few.

Sound Like is an 11 track record from the singer. It features an indie pop rock sound that’s made even more special thanks to the artist’s excellent rockish vocals.

It’s not just the rhythm or beat that makes this special, Noonan also has a knack for incorporating quirky lyrics to his songs. Thanks to this, it becomes even more entertaining to listen to.

Although opener, Air Guantanamo, might sound like a cheesy 80s love song in the first few seconds, trust me, it’s worth listening to. If you listen closely to the lyrics, you’ll realize that it’s about a man who apparently gets stopped at an airport terminal and most of his personal items (toothpaste, shower gel, etc.) gets confiscated since it poses a threat to a flight. Then again, his Semtex and C4 were allowed to pass through. As laid back as the song might be, it actually makes a big statement, referring to the terror threat and name checking Guantanamo Bay.

Other tracks also feature witty narrative lyrics that make you want to listen to what he’s saying apart from enjoying the beat. Just check out, Hello John, How’s the Leg?, Internet Addict, and People Are C*unts, to see the artist in action.

Sound Like is a fun album to listen to. You get a little bit of everything, catchy beats, great, funny/entertaining lyrics, good instrument and vocal work; it’s all in there to varying degrees. Grab the download, I’m pretty sure you’ll find a place for it.