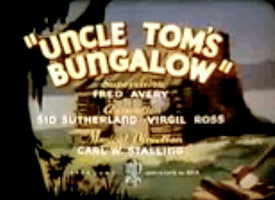 An old time classic coming from Warner Bros, “Uncle Tom’s Bungalow”, can be only described as all fun and laughter – exactly what the Looney Tunes are famous for and doing best.
With a run-time of 08:33, it is great to see how the environment manages to look convincing with just sketches. On top of that the cartoon features some really epic “characters”, from a little kid with the meanest expressions to the sleeping hounds. These little personalities sport varied voice-tones and emotions that words simply cannot do justice.

The cartoon tells a story of Uncle Tom who is fearfully put up at Simon-Simon Legree’s “Used Slave Co” and is being whipped at various occasions. Not a long time passes, however, when Topsy and Eva (two little girls) rescue him out of slavery. The plot is quite intense and heavy for an animation of this kind (in fact it is one of Tex Avery’s banned cartoons), but a half a century later it makes it that much more important to see.

On a personal note, I really loved the way the proverbial bad guy of the cartoon “Simon-Simon Legree” (pronounced as SEEMOAN-SEEMOAN) looked with a long fine moustache stretching from point A to B, big teeth, large hat and the evilness that oozes out from his smile. Quite a heady mix for a cartoon and enough spice for a good laugh.

If you really want to know what is all the hype surrounding the bungalow of Uncle Tom, then the best way to find out is by watching this old time classic and living through brief moments of fun.