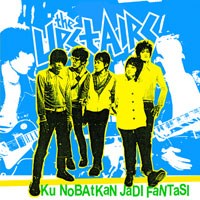 Music is universal. Sometimes you don’t need to understand or know a language just to appreciate a song. Take the Indonesian band The Upstairs’ debut EP, Ku Nobatkan Jadi Fantasi; just one listen and you’ll adore the hipster new wave album even if you have no clue what they’re singing about.

Mixing punk, dance, new wave and plenty of fun, the band released the record in celebration of Jakarta’s Independence Day. It served as a present to their fans especially the ones that have been by the band’s side since they first started.

This album is released under Yes No Wave record and is available for free download under a Creative Commons license.

Ku Nobatkan Jadi Fantasi EP comes with 6 tracks, most of which were previously released and just one new song included. Compared to most of the other artists from the Yes No Wave label, The Upstairs feature a more mainstream sound. However, this doesn’t mean their sound is generic.

From the title track and opening single, Ku Nobatkan Jadi Fantasi, you can tell that this band are heavy on the hipster new wave beat. Their sound is filled with energy. Rolling drums, jangly guitars and a great mix of vocals combine to create a fun-filled catchy track. Dansa Akhir Pekan is an interesting cut that would feel quite comfortable playing in an 80s radio station. The last two cuts; Terekam and Lompat are both live tracks. The first being an electronic synth infused danceable cut while the latter is an acoustic set from the five piece band.

If you’re looking to broaden your musical horizon, then go ahead and give this one a go. It’s worth checking out and listening to.