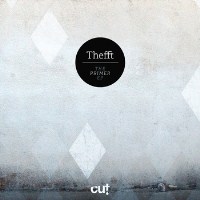 The newest release from ambient electronic netlabel, Cut Records, is from Thefft. It seems the artist has been brewing underground for awhile and now he’s ready to show off his skills with his EP, The Primer.

Much of the hype is warranted though as the album skillfully intertwines beats, bass and synths to create a delightful fusion fit for some good old dancing in a bar or club.

The man behind all the glorious beats is Jack Robertson aka. Thefft. Although he’s not a full newcomer, he’s definitely making the rounds this time and causing a stir. Born in London, he’s currently based there and hangs out in New York whenever he gets a break, creating and producing sonic tracks that are worthy of a listen.

Opening with No Match for She, the song is a great sample of what you can expect from the artists’ sound. It’s filled with a catchy rhythm and various bits and bobs that make it refreshing to listen to. Whether you play it in a jam packed dancefloor or simply listen to it over your headphones, you get this distinct sound that’s easy to like.

It’s followed by Gammy Crazy, an eclectic mix of synths and samples topped with a good bass beat. The short 3-track EP is then finished off by Stares, which starts off with various clicks before slowly transforming into a sculpture of sound.

Overall, it’s one short record to check out. Thefft definitely has a knack for creating a fresh spin on traditional electronic beats; making you want to check out more of his work. You can grab most of his works right over at his BandCamp page.