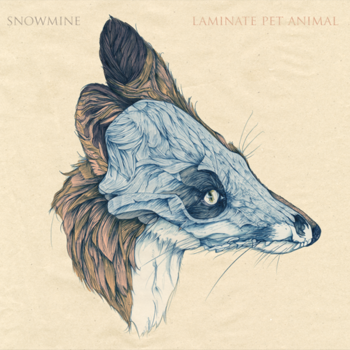 Seldom do you encounter a band that has a distinct music palette, but Snowmine delivers more than that. Released last May 3, Laminate Pet Animal is made up of nine genre-bending tracks that live up to the band’s eclectic music.

Hailing from Brooklyn, the five piece collective composed of Grayson Sanders, Austin Mendenhall, Alex Beckmann, Jay Goodman and Calvin Pia have captured the attention of culture bloggers with their beautifully-arranged music. The kind of music that reminds you of The Smiths and the Yeasayer.

The beat drops in Beast in Air, Beast in Water which blends beautifully with tribal beats and spacey, lazy electric guitars. It’s also richly written so make sure to check out the lyrics.

Danger in the Snow! and The Hill are clever pieces where the band’s creativity and experimentation sheds off. The subtle drum beats transitions into a fast, rhytmic tune that’ll give you a steady psychedelic dose. You can watch them play The Hill live here.

My personal favorite is Penny mainly due to its 80’s pop vibe, ambient harmonies and Grayson Sanders’ soothing vocals. This is the kind of song where you just want to close your eyes, listen and fly through space.

The album closes up in a grand finale with Hologram, a nostalgic piece with layers over layers of electric guitars. The almost-acapella solo in the middle backed up with cosmic electric tunes, slowly building up to a string and drum heavy ending is perfectly placed.

Laminate Pet Animal is utterly amazing. Every song in the album was a surprise, each of them had a one-of-a-kind harmony that it’s hard to decide which one you’ll like best.

The album was mixed by Dave Trumfio and mastered by Steve Berson. The wonderful cover art was hand drawn by Jesse Corinella. It’s available as a pay-what-you-want/free download.