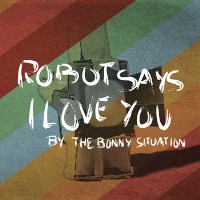 The Bonny Situation: Robot Says I Love You

Taking their name from the iconic movie Pulp Fiction, The Bonny Situation has definitely got one of the coolest names any indie film geek will recognize.

The band itself is from Germany and have been around since 2007 with a slightly different lineup back then. Although the band admits that their sound is mostly consists of pop music, they do like to mix it up a bit; adding a little alternative and even new wave in there.

Robot Says I Love You is a 2010 release from the group. Most of the tracks on the record were inspired by the contents of a 1978 diary from someone with the initials R.B.T.

Creating music that is quite danceable, the band’s sound is a fusion of electronica and pop. Kicking things off from the record is the track, You Build Me Up. It’s a love song of sorts, pledging affection and devotion to a special someone. Meanwhile, The Way You Are, is a punchier track that calls to mind Aussie band, INXS.

Some of the other tracks like Human Says I Love You and Holding Back, are a bit more mellow. The latter track particularly seems perfect for that prom dance capper where all the couples slow dance and just be in love for the remainder of the song.

Apart from these last two songs, the rest of the album is one big pop dance rock affair. There are plenty of cuts on here that serves as the perfect party music; they’re upbeat, with melodramatic lyrics as well as great mix of instruments.