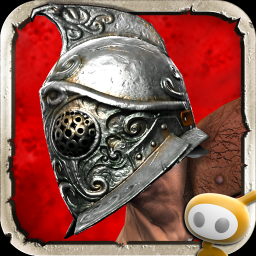 Developed by Glu Mobile, a very popular game developer on the Android Market, this is another masterpiece offering from their stable.

Unlike Infinity Blade, Blood & Glory is set in a Gladiator battlefield with a true Roman touch. The Coliseum has been designed in the finest of ways and the visual appeal is immediately hiked in a blink-of-an-eye. Graphically the impact is high and the rendering of graphics, shadows, architecture, swords, characters, armor and textures is very life-like and only witnessed in the much high-end HD game titles from big-wigs like Gameloft and EA Mobile.

In Blood & Glory, the entire game revolves around blood, fighting, courage, honor and glory. There is no fixed storyline that drives the game, but nonetheless it is not baseless by any chance. The game offers players a huge arsenal of heavy-duty weaponry and armor to throw their opponent down the pits of the coliseum and stand victorious.

The game play is very intuitive to say the least as all the fighting and slashing is done with finger swipes on the touchscreen (Fruit Ninja anyone). Blood & Glory also features some really slick combo attacks all while displaying the level of hits on the screen. Further, players can block, dodge, and perform special attacks on their opponents for the perfect finish.

With Blood & Glory, Glu Mobile has proven highly successful in bringing a game as great and visually appealing as Infinity Blade to a powerful ecosystem like Android. The game is free but the in-app purchases are steeply priced, but don’t worry as they are not compulsory to finish the battle successfully. So gamers, “Let the Games begins”.