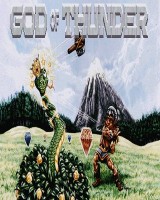 Here we have another little gem for the old-time gamers; a full-fledged 2D action called God of Thunder. The game takes on a very minimalist approach when it comes to the visuals and comes with no 3D realism thrown-in. It is simply meant to be played and enjoyed.

Developed by Adept Software, the game is on the lines of the Norse God, Thor. This is a top-view game created by Ron Davies and published by Software Creations, way back in 1993.

The games follows the path of Thor, to reclaim the Midgard ( Norse mythological land of Odin) for his father. To complete the entire adventurous journey, Thor is blessed with the mythical hammer Njolnir. The progress of the game is heavily dependent on the numerous puzzle-solving and the slash fighting techniques.

The game puts the players in various situations, such as, countryside, sneaking past city guards, and finally entering the resting place of different Gods. Like many old-time classic games, even here, Thor gains additional powers with progress and even the hammer and armors get various upgrades when he is able to defeat one of the three nemesis. Players are also watched by Odin throughout the game, so if the hammer strikes an innocent bystander, Thor gets a disapproval by the king of the gods, Mjolnir.

God of Thunder have different nuances as well, with very well thought tounge-in-cheek humor thrown-in. It features several references to the Marvel Comics book character Thor, with the idea of the Odinsleep, Loki’s costume and a quick mention that Thor should have his own comic book.

Overall, a classic game which might/will not appeal to the younger generations, but for those who grew on the Windows 93 PC will just relish this offering and delight in the gameplay.

P.S – The license agreement of the game allows for one copy for personal use and one for backup only. The software is protected by United States copyright laws and international treaty provisions, and users cannot lease, sell, distribute or copy the “look and feel” of the game.