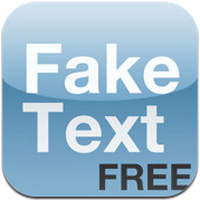 If you are in the mood for some mischief, Fake Text is a perfect solution for all your pranks. The app is cool and the result it produces is more than authentic.

So what does Fake Text actually do? It allows you to enter a message and add a name in the senders field. The perfect solution to get out of a situation and show your friends that you “really” are friends with that celebrity you’ve been talking about recently.

Yes, the name can be anything from Bill Gates, Steven Spielberg, Barack Obama and every A-list person who you have ever wanted to communicate with.

The app replicates the message exactly the way an iPhone message should look-like without any “Fake” touch. Fake Text does not send messages, but just makes it look like an incoming text message has been received. This app is more of a prank app and is perfect for making a total fool out of your pal.

The user-interface is minimal and there is nothing much to talk about. The app also has a paid version, retailing at $0.99 with the elimination of advertisements, updated clock for a touch of realism and a fresh look to the entire UI. As a prank app, this one really makes the cut and the number of downloads speak for it.