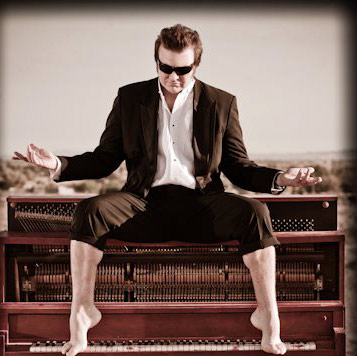 Kevin Burdick: In Your Cocoon

Currently based in Utah, the singer has 5 releases under his name. Among his albums is this 4-track compilation, In Your Cocoon. It’s a few years old but it’s a great record to have if you want to dip your toes into the artists’ sound.

Sounding off a bit of Billy Joel and Elton John, Kevin Burdick is steadily making his name known worldwide. He’s performed in various key cities as well as arena sized crowds; delighting the audience with his soulful ballads while adding a sweet touch of rock.

Coming from a musical family, it wasn’t long before Kevin wandered around to his instrument of choice; the piano. Although his mom had trouble keeping him motivated, he eventually grew to love the instrument and use it in conjuction with his love for rock.

In Your Cocoon, sees the artist sharing four special songs with his listeners. Opening with the title track, this one’s a quiet cut that combines Burdick’s heartfelt vocals with his expressive piano work. It’s followed by the two minute single, Mercy, which laments a man’s struggle as he overcomes the bottle and asks for a bit of patience.

Meanwhile, She Does Her Crying Alone has a more country vibe. It’s also one of the more melodic tracks that highlights the singer’s beautiful tenor vocals. All Wrapped Up Tight In You, finishes the album in a high note. The soft ballad is short but sweet, teasing the listeners into what the artist is capable of.

Overall, the record is a bit short at less than 15 minutes but it’s enough to warrant a listen. If you enjoy mellow, pop rock then you’d most likely enjoy this compilation. Grab the download. The artist is offering this one absolutely free over at his website.

Apart from this record, you can also check out his other albums like his 2002 debut, Deep Blue America; True Stories and Other Fairy Tales (2005); We Are The Walking Wounded (2008) and his most recent one which was released two years ago in 2010, The Ivory Coast.