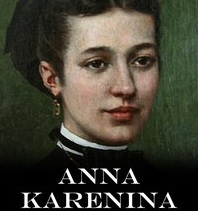 Release that hidden book worm and devour on one of the Russian greats, Anna Karenina by Leo Tolstoy.

Lev Nikolayevich Tolstoy was a Russian novelist and short story writer whose canonicals works set the standards on realist fiction. He was also known for his moral thinking and social reform actions.

Originally published in the periodical The Russian Messenger through serial installments between the years 1873 to 1877, Tolstoy considered Anna Karenina as his first true novel.

The novel talks about the doomed love affair of Anna and Count Vrosky set within the backdrop of 19th century Russia. She falls in love with the young military officer regardless of society and family stature. As a subplot, the author includes the story of a farmer who falls in love with a woman of higher class which sets a stark contrast between the love affairs.

Anna’s character can be compared to one in a Greek play; as soon as she follows her heart, she’s subjected to fatal consequences. Tolstoy writing is fluid. He presented a story that’s not just about family bonds and self happiness but also managed to discuss a plethora of social issues. He classically reveals the two classes of the Russian caste system and how they see each other.

Anna Karenina is one great novel who does not make use of cardboard cut-out characters. This is a rich book ideal for the long weekends ahead.