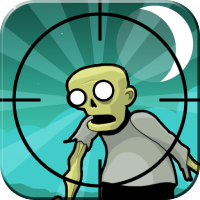 iOS and Android are the toughest gaming platforms at this point of time without a doubt. Both have also had their own share of zombie game offerings with the perfect mix of blood, gore and the sliminess. Well, here we present a “Stupid” Zombie game, yes the game is called Stupid Zombies. Let us find what is so stupid about these blood sucking, brain-dead maniacs.

Created by GameResort LLC, this developer has a penchant for the word ‘stupid’ in their games and is no new entrant to the gaming scene having quite a few worthy titles for various platforms such as OSX, iOS, Android and Web already under their belt.

The game is a very simple one. No thinking, no strategy, no planning, no nothing. Just go out and shoot those blood-thirsty zombies for points, points and more points. The game seems quite identical to Angry Birds and in some places really turns out to be a dud.

The game really does not give much room to talk about, but focuses only on the structured gameplay. Overall, being more than just similar to Angry Birds, the play-ability does take a considerable hit over time, but it is a fun time-killer for sure. So all iOS and Android users head over to the respective stores for some fun, casual time-killing fun.