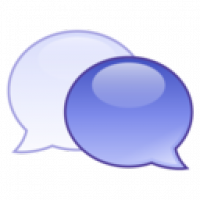 Are you tired with the same look of your phone’s interface? Well, if you are a Blackberry user yearning for more, then it is time to shift your attention towards CrunchSMS. This particular app adds the missing zing to the entire messaging interface of Blackberry devices.

Delicious Inc., the developers behind this little gem might not have a lot of other apps under their belt, but CrunchSMS have certainly placed them at the top of their game, allowing you to add a cool new look to the mobiles devices waiting for a makeover.

CrunchSMS adds chat style bubbles to the normal messaging. So the sent messages are in a green bubble, whereas received messages are in a steel grey bubble (very iPhone-like, if I may add). Further, users can also view contact pictures within the messenger, surely a very neat feature. Users will love the quick-reply feature, under which a reply is possible directly from the homescreen itself.

Another great addition that in my opinion is highly welcomed, is the support for Emoji icons. These icons break away from the conventional smileys and add a galore of animation for extra fun; meaningful and awesome twist to the entire conversation. The app also supports for a signature feature, precisely helpful when messaging an unknown number or for official purposes.

CrunchSMS is a great app and adds extra functionality to the entire Blackberry default messenger. Being a free app, the developer relies on adverts. So, users who just cannot tolerate in-app adverts can purchase the license key for an ad free experience. Otherwise, the CrunchSMS is a full-version app with no limitations whatsoever. Blackberry users, its time for a fresh touch to your device.