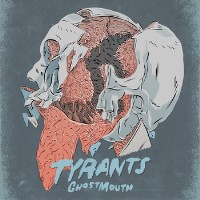 There are times when you simply want to take out your music player and listen to the loudest record you have on there. GhostMouth EP from Tyrants would make good company for these kinds of afternoon.

The London, hardcore four-piece released this mini compilation back in 2011. It served as a follow-up to their self-titled debut released earlier that same year.

It’s quite rare for a hardcore metal band to grace the pages of the blog so thought I’d fill in the gap by introducing, Tyrants. This crew knows how to get loud, with deafening levels of growling, drums and guitars.

The EP is short, with only four tracks but the jolt of energy is perfect for waking you up and out of a sleepy bed. Starting with the barely two minute single, Fading Light; the track marches with garbled vocals, heavy distorted guitars and fast paced drumming. Meanwhile, Conscript, isn’t even a proper song at it only runs for less than a minute. Again, filled with nothing but loud shouting and good tempo. Title track, Ghostmouth and Dead Never Speak, complete the loud record.

Even though the EP isn’t perfect and feels that it still needs a bit of polishing in certain areas, it is good for momentary hardcore rock cravings. Tyrants is a band that knows how to knock your socks off in terms of volume and decibel. Perhaps in their next offerings, they’ll fine tune their compositions and create tighter sets, improving their sound as they go. Take a listen and see if you like it.