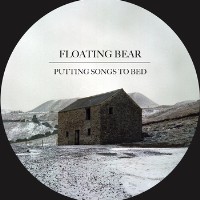 Acoustic and sporadic singer, Floating Bear releases his acoustic debut compilation. Putting Songs to Bed is a collection of tracks written between 2009 and 2011.

Serving as an introspective demo, the tracks needed a home and was compiled by the singer to create this quiet and moody piece that echoes of gloomy, contemplative mornings in your bedroom flat.

Incidentally, much of the tracks were recorded by the singer in his bedroom in London, March 2012.

With an acoustic guitar on hand and some melodic singing, the short EP starts with, Voices of Sobriety. Although the track has a very homemade feel, it’s this same thing that makes it charming. A certain honesty emanates from the whispery and at times, shakey vocal work. This is evident on several tracks on the record.

Majority of the songs are low-key, with the singer’s melodic guitar picking and strumming doing the only accompaniment. Apart from the opening cut, several standout songs that define the record include Song for the Fox and Let There Be You.

This may not be the most polished record out there but it bears a calming and oftentimes, relaxing presence. You can grab the free download over at BandCamp. Meanwhile, you can also check out Floating Bear in the rock band, T-Shirt Weather.