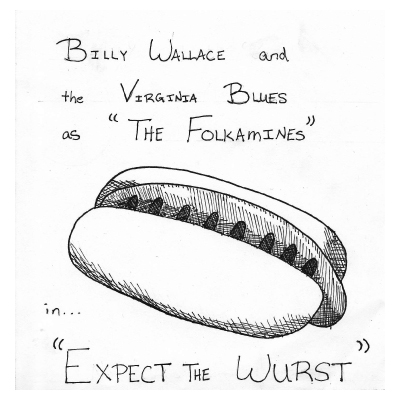 Billy Wallace and the Virginia Blues as The Folkamines: Expect the Wurst

Billy Wallace and the Virginia Blues is spearheaded by well, Billy Wallace. Oftentimes, he’s joined by various musicians to create his beautiful sound but his usual comrades on stage include Matt Hemingway, Tim Colina and Alex Frederick.

Expect The Wurst is sort of a tribute record of sorts for The Dopamines, a pop punk band from Cincinnati, OH. Unlike punk played like the Sex Pistols, this compilation from “The Folkamines” focuses on a more mellow, indie folk vibe than anything else. It has been a while since the album was first released, but it’s never a bad thing to reintroduce people to good sounding music.

Expect The Wurst opens with Satisfaction, a short but cleverly worded acoustic indie cut. It combines lovely male and female vocals, harmonizing gorgeously together to create a feel-good song you can put on anytime. Songs like Molly and Rushmore are mixed in with a tinge of the blues courtesy of the harmonica. Although at times the vocals seem detached from the actual song, the melody does make up for it.

Some of the most enjoyable cuts include Soap and Lampshades and Fun Tags. Both songs are upbeat and combine quirky lyrics giving listeners a fun song to listen to instead of something that sounds like the band is trying to hard.

In the end, the album fits nicely if you’re looking for a laid-back indie folk compilation to play on your way to work. It doesn’t smash any records but it’s good enough to check out. It’s also perfect for any fans of The Dopamines, of course. Grab the download and take a listen.