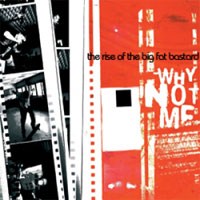 whynotme: The Rise of the Big Fat Bastard

Formed back in 2005, Whynotme is a five man band from Nordic country, Norway. The Rise of the Big Fat Bastard is the band’s first full length album. It’s a collection of 10 fast paced, stylish and very punk rock tracks that breathes a lot of energy.

Although the band claims that it was recorded in “poor condition,” it actually doesn’t sound that bad. Better yet, its filled with fun and catchy tracks that’s hard to let go.

The Rise of the Big Fat Bastard came about as a tribute to their bassist/keyboardist who apparently turned his back from television in order to pursue music with the band. Majority of the tracks were written by guitar/vocals, Folke Solberg and several other members contributed to the process as well. Currently, the band has released two other albums, Sparkling Chandeliers (2008) and And Out Came Shit (2010).

For this first album, all the tracks are quite catchy. It might take some time to get to the vocals, (personally, it took awhile for me to like it) but it grows on you. Some of the must listens in the album include goingtomars and punks. Both tracks are straight up punk rock. However, unlike most punk songs where each one sounds like a doppelganger of the other, there is enough variety to make each one likable on their own.