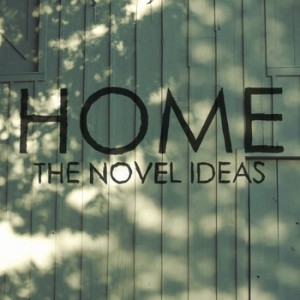 There’s acoustic folk pop, and then there’s awesome, vibrant acoustic folk rock from The Novel Ideas! These Massachusetts natives can evoke emotion and create a beautiful mood with just a skillful guitar rhythms and melodic singing, so watch out because you are in for a treat.

After starting a Kickstarter campaign, the five-piece managed to gather up enough supporters to record and release Home by April 2012. Made up of Daniel, James, Danny, Sara and Nick, the group’s first two compilations were The Sky is a Field, released back in 2009, and Summer Demos, which came out in 2011.

From quiet acoustic sets to upbeat folk pop cuts, Home indeed creates a place where you can be comfortable and simply be yourself.

Songs like The Blue Between Us and Promise bring in a sense of excitement and fun. Both tracks are upbeat, featuring happy vocals and awesome harmonies. It’s the track you play if you want to go head outside and enjoy the sunshine.

On the other hand, Saint Marie, Not Enough and Lonesome George are mid-tempo songs the create a laid-back mood. These are meant for lounging around the hammock or the patio and just enjoying the day in a less frenetic way. Finally, Heart of Stone, really brings the pace down. In the track, the band showcases their mellow side; giving listeners a chance to sit down and reflect. One of the best cuts on the compilation, it’s a track that shouldn’t be missed.

An album that you can feel cozy in, Home, pretty much achieves its purpose. The band creates traditional acoustic folk in one sense but they make sure to infuse it with charm and sincerity that echoes in each line and guitar string in the track. A polished and endearing compilation worth the check out. Take a listen and enjoy!