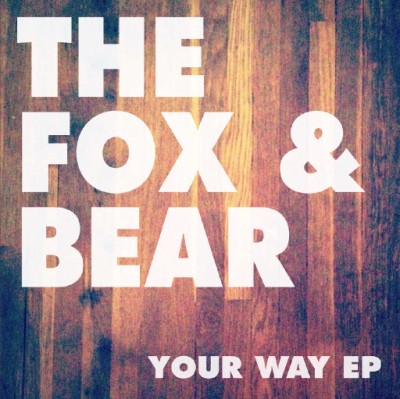 The Fox & Bear: Your Way EP

When close friends get together, sparks fly and in this instance, good music also comes out. The Fox & Bear is a collaborative effort by close friends Caleb Kuhl, Brandon Owens, Jesse Koska & Jonathan Dimmel.

Your Way EP is the first from the  group (and hopefully not the last). After recording the initial tracks, they took the project to Kickstarter to cull donations for the mixing and mastering of the record. They released the EP on November 2012. With only four tracks included, it’s quite short but it’s expertly written and provides an array of melodic indie rock that’s easy to like.

Alternative indie rock number, Your Way opens up the record. Expect gritty guitars and some catchy indie pop rock. The band’s sound actually reminds me of Jimmy Eat World in the 90s. It’s fresh, catchy, fast and definitely great to listen to. Die To Live and Getting Bored further that 90s pop rock touch. Vocals are accompanied by chant melodies and choruses along with catchy beats.

Walk Through the Fire is the final cut from the short record. It’s a bit slower compared to the other ones but it delivers that signature indie rock flair the band has established.

Your Way EP definitely delivers in terms of performance, instruments and great catchy hooks. Grab the download, this one is worth the listen.