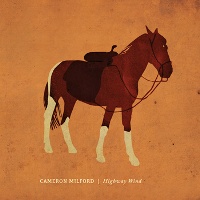 A singer-songwriter from Brisbane, Australia, Cameron Milford creates music inspired by the natural events and occurrences experienced by people. His latest EP, Highway Wind, is shaped by blending the sounds of American, traditional county and bluegrass, with the lyricism of folk rock. It was released through Storybridge Sounds on May 2013 and has been dominating indiescape ever since.

Before making his way to US and Europe, Cameron has been doing music in Australia with the bands Inntown and The Golden Spurs. The recording of Highway Wind was an international breakthrough that crossed Brisbane, Nashville, Sydney, and Memphis.

All songs in the EP were written by Cameron except for Oh Susannah. The album features a group of acclaimed musicians including; Rob Ickes (IBMA Dobro Player of the Year 2006-2012), David Henry (Steve Earle, Missy Higgins), and Doug Gallacher (Crossfire, Slim Dusty).

Fast as You Can, the lead single of the EP, has reached the Australian Top 20 Country Charts for 98.9FM Brisbane short after the album was released. It is conveyed with such warmth and cleverness that hesitations in listening to alternative country music fades.

Hiding in Tennessee shells out classic country music. Sway and listen to the banjo playing as it transports you to chill barbecue afternoons.

Caroline will make you stop in your tracks. How awesome is country music filled with love and affection? This song is for all those whose heart is breaking.

All in all, Highway Wind will create a mighty bold imprint in your heart and will make you love country music even more.