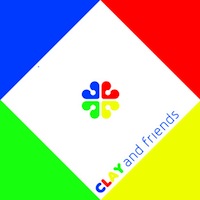 There’s always something fresh, something easy, and something breezy from Clay and Friends. A Quest Called Jam was released 17 May 2013. The group is composed of Samish the king on lead guitar and back vocals, Aydell on beat box and production, and Clay on lead vocals and rhythm guitar.

Demolisten is a short song with an ultra hip-hop beat at the beginning. Backed by a slight strumming of the guitar, this track will exude that kind of funk. The clean rapping that stretches throughout the piece gives an interesting thump to it. The beat boxing also adds a hip-hop kick to the track.

Hey Mama, from its beginning up to the end, oozes a reggae vibe. Press play and let the song bring you to a psychedelic chill.

Closing tracks Augusta Road (Night Bus A) and The Juke Box (Night Bus B) both start with an exchange of dialogue and then rapping throughout the song. Press play and let the sharpness of these tracks fill your soul.

With influences from acoustic, hip-hop, reggae, and soul, A Quest Called Jam is a great companion while hanging out with friends.