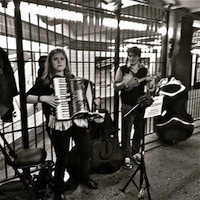 Number is not anything, as this two makes a powerful big sound to the music scene. Fusing 19th century French chanson, 1960s American soul, and original indie-pop material, these artists deliver brilliance and genuineness through a countless of song styles.

My Heart Belongs to Daddy is a song that would remind you of a 19th century ball. The song fused with accordion is very classy and is a delight to the ears. You may find your feet tapping along with the song.

Dark Road, on the other hand, is as elegant as the first track. This has a longer accordion intro, but has the same jazz beat.

In addition to that, Knapp’s singing in Roses reaches for more high notes.

Imagine watching an opera from the early times, comprising of classy and jazz melody. If you are too tired of listening to pop common music, this album is a great choice.