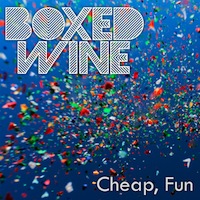 Boxed Wine ramps up the party with their debut LP Cheap, Fun released last May 2013.

Experience the power of indie party pop with ten tracks from Chris, Ralph, Mike, and Steve. With musical influences such as Tokyo Police Club, Vampire Weekend, Ra Ra Riot, Two Door Cinema Club, and The Strokes, it’s no surprise that this New Jersey-based band has a lot to offer.

The fun starts with funky tunes and hand-clapping rhythm in Into the Nite. The piece sways in a moderate, energetic vibe that deserves some booty shaking.

Swerving to party pop perfection is Cannibal. Get lost in textured, garage strings toned down with an arrangement reminiscent of surf rock. Short, witty lines shroud each note making the song fun and easy to digest.

In First Time, the band approaches it with the same gusto as of the previous tracks, though with more hints of percussion on the background. While On The Run blooms through the ears with sporadic beats and echoing vocals.

Ending the album with a playful vibe is Tells Me So. Get ready to pump up that energy with a kick charm and quirkiness.

This album shows the competitiveness and passion that fuels Boxed Wine to create solid and well-polished music. The songs here have enough replay and playlist worthy value. So do yourselves a favor and download Cheap, Fun!