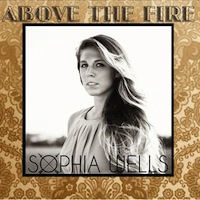 Sophia Wells: Above the Fire

Sophia Wells‘ first venture is more of like an image of a song being sung in the middle of the autumn.

Above the Fire is a five-track album made for those who love to listen to this combination of country and folk. The singer’s soulful, earthy with a pinch of rock vocals is combined with the beats of drums, and the strums of a guitar and a bass.

Opening track Grounded is a fusion of country and folk sensibilities. Here, we are introduced to the entire vibe of the album. It is easy to listen to and will appeal to your senses. Among the other tracks, Grounded will be that song where you can you just chill and watch the sunset and still feel good about everything.

Adele‘s Hometown Glory is given an earthy rendition. This piece, contrast with the emotional Adele’s rendition, Sophia Wells’ version has a soulful-folk embedded in it. It doesn’t mean however, that this talented artist lacks emotion though. Her unique vocals provided her well with this tricky cover because after all, this is an Adele’s song we are talking about.

Whether it’s the LSS-inducing lyrics or this young artist’s unique vocal rage, Buried will definitely be the track that will make you hit repeat. This track is the ultimate keeper in this album. The song itself features lyrics that will tug your heartstrings.

Other than the previous track, One Last Thing will be likely a fan favorite. This is undoubtedly, the Trojan horse in this album. From the folk/country blending in the previous tracks, the song hits the earthy vocals of Sophia Wells perfectly with the unpredictable beats from drums and the bass. Its mixture of everything: soulful, earthy, with a pinch of rock, and yes, this track is the reason why we put that combination earlier. It embodies the singer’s vocal range, and her musical style.

We should all watch out for this breakthrough artist and her future songs. Keep singing, Sophia!