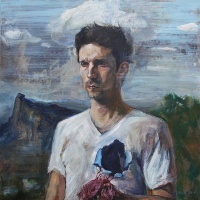 A cacophony of eccentric melodies and stylings, The Course of Empire translates beats and imagery into good music that moves our inner cores. This five-track thematic album by Telepathic Teddy Bear is based off the series of art paintings by Thomas Cole, which played a big part in reflecting popular American sentiments in times when many considered pastoralism as an ideal phase of civilization, fearing that an empire would lead to gluttony and inevitable decay. The song titles in the album are adapted from the titles of Cole’s paintings.

Opening the collection with understated elegance is The Truth of Violence. Short, poetic lines are put into motion with tribal beats and electro gritty vocals. The track features a rich, almost bestial atmosphere, which are finished off with a plethora of drums and thick beats.

Acoustic and electro soundscapes embellish The Benevolence of Ghosts. Listen as quiet, almost ghostly lulls are mixed with riffs and synths, creating an endearing listening experience.

The Remnants of Will adapts film score-esque piano keys and fuses it with samples of chirping birds. I love how the soft cooing arrangement on the first part seamlessly blooms into an ethereal ambient arrangement. Close your eyes and let this simple yet beautiful piece transports you to calm peaceful landscapes.

The Course of Empire is more of a musical album than a lyrical one. It highly invests in its ability to stir and affects the listener’s mood through varied texture of sound and instrumentation. This is not your typical indie goody, and that’s what makes it so special.

Track List:
1. The Truth Of Violence
2. The Benevolence Of Ghosts
3. The Milk Of The Earth
4. The Bleeding Of Mercy
5. The Remnants Of Will