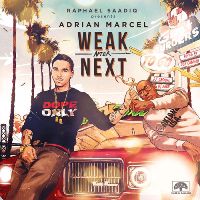 Adrian Marcel: Weak After Next

Adrian Marcel treats fans with a free musical project tiled Weak After Next, a follow-up on his 2013 mixtape, 7 Days of Weak. Marcel is an up-and-coming artist that’s been recently creating waves thanks in part to an affiliation with Raphael Saadiq.

Featuring a hefty list of 16 tracks, the collection features from household names usch as Snoop Dogg, Kelly Rowland, Casey Veggies, to name a few. The beat drops on Ray Ray’s Intro, which opens on a smooth sensual opener that slowly transcends to a cacophony of solid reverberating beats, vocal samples, and laid-back rapping.

Go infuses Marcel’s RnB skills with a rich dance-inducing track. Marcel’s vocals shines through in this song as he showcases his falsettos and and textured vocals. Press play and let this addicting track get your groove on.

Clocking in at number 5 on the list is Runnin. Marcel’s polished voice is set on a subtle and atmospheric arrangement while dropping some solid beats for variation and energy. While Feelings utilizes a comical intro and then proceeds in an RnB track that infuses smoke and cool loops with gritty electro samples. The track’s fluidity and swag gives just the right kind of energy.

Weak After Next is a rock-hard compilation of RnB tracks that are individually confident with its production and style. In this album, Adrian Marcel proves himself as a true RnB artist that knows his genre inside and out.