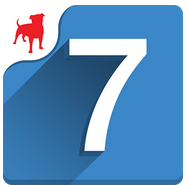 Drop7 has been around for a while now, but game publisher Zynga has updated it for a new breed of gamers making it an always addictive title. The premise is simple and easy to learn, but mastering is difficult, so it’s another of those “just one more try” games that are so hard to put down.

The puzzle is set on a grid with colored balls numbering one to seven. The goal is to drop one of the balls in a line that is equivalent to its number. So if a number 3 ball appears, go for that column and bring the ball down, and if it ends up where there are just two balls in the row or column, the ball disappears and you score.

This can also trigger off gravity and set off other balls moving – helping you increase your score. So the ultimate goal here is to have your ball’s number match the number of the balls in the row or column, and if you can hit other ones, that’s even better. After several turns, the round ends and new blank canvas shows up on the grid.

Drop7 sounds simple as you just need to eliminate as many of the balls and score until the grid gets filled up and you can’t place another ball in anymore. Plus if you’re able to clear everything you get a ton of bonus points. But this isn’t as easy as it sounds, and that is part of the Drop7’s charm. If you’re just starting out, go with Normal mode, and if you’re feeling brave, try Hardcore later.

Ain't No Love: Tears of Joy