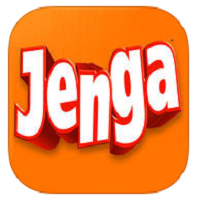 The official Jenga game from NaturalMotion, released with the help of creator Leslie Scott, provides you with plenty of entertainment on your iOS or Android. As you might expect, the game employs real-time 3D physics simulation so the behavior is the same as a real Jenga tower.

Because of this, every block is affected by the others surrounding it, which requires you to use the same in-depth strategies as the original. The game really shines in terms of controls, as it responds well to your touches be it on the iOS or Android. This obviously is crucial when the blocks get higher and higher.

To manipulate the blocks you’ll need to resort to gentle taps and drag the blocks away. The controls are easy to learn, but it will take a while to master them, and you need to be careful when the tower starts to shake a bit. To view your tower, just move your device, and this will come in handy because you must assess the tower’s structure before you make the next move.

Probably the best part of the game is the multiplayer option. Up to four people can take part in Pass N Play, adding to the fun and excitement. In addition, you get to see what the record is for the highest tower is and try to go after it. And if you don’t feel like playing a long complex game, there’s arcade mode. Other game options are also available that make it even more enjoyable.