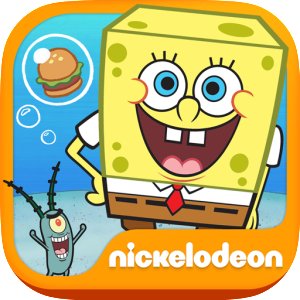 SpongeBob Moves In is all about city building, so if you’ve played these games before the mechanics will be familiar. Developed by Nickelodeon, it’s a polished game that moves along nicely, offering a nice mix of challenges without being overly difficult, which should suit casual gamers just fine.

The game starts when SpongeBob’s parents send him to Bikini Bottom. It’s a very small town with just a few fish that don’t do anything much. SpongeBob has to change that, so you go off and try to turn this small town into a city that’s worth living in.

You do this by gathering funds from the renters at Bikini Bottom, and you’ll also earn currency by granting the wishes of the residents. Wishes vary but it typically involves giving them some type of food. For instance, if you serve burgers for someone who wants it (signified by an image), you’ll be paid with coins you can use to build more structures.

Most of the game centers on building homes and serving burgers to the residents, but SpongeBob also lets you add trimmings and decors around the town. The more you play the game, the more items and recipes you’ll be able to unlock, plus you’ll see animated films that highlight the things SpongeBob has done for the city.

The gameplay is a lot of fun, and there are references to the characters as well. Just like other city building games on mobile, you’ll need to wait for the buildings to grow. But it doesn’t take that long however, so it’s worth a try.