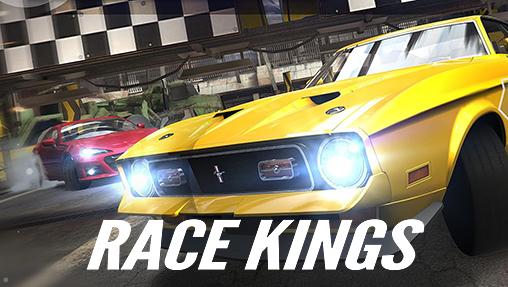 Race Kings is probably not the first drifting game you’ve played if you’re into the genre, but that doesn’t change the fact this is a fun title as Hutch Games did an excellent job of crafting the game. It requires an Internet connection and is perfect if you like to play in short bursts and don’t want to invest too much time strategizing.

Here you’ll always be competing against other players, and it’s easy to get into. As soon as the game starts you’ll need to tap the gas button. Next you tap the handbrake prior to making a turn and then hit the gas to sustain your drive.

It’s not difficult to remember, and you’ll eventually get into rhythm and drift with confidence. Success depends on your skills and that of your opponent’s, but either way each race is fast and furious.

Skills aside, it’s the quality of your car that determines how well you’re going to do in the race. Your starting car is fine for the first few races, but you’ll want to upgrade them and get better acceleration and brakes. This isn’t as difficult as it sounds because it’s just a matter of tapping and swiping, and the changes you make have an impact.

You’ll need to place a bet prior to each race whether you’ll win or lose, and if you win you’ll be able to use the money to upgrade your car. Race Kings is not the most complex game available, but if you’’re the type who likes to play in bursts, then you’re going to love this.