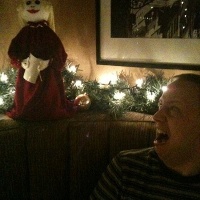 Derek Clegg serenades our ears once again with his distinctive brand of Indie-Folk in his new album, ‘Here Comes Your Fate, Quick Duck’. This album is tremendously good for easy-listening and regardless of what you normally listen to, prepare to be temporarily converted. Indie Folk seems to be the foundation of Clegg’s music, although, at times he intertwines genres such as country and rock. His music is never predictable; each track change also comes with a new surprise. This can be partly attributed to Clegg’s impressive repertoire of multi-instrumental abilities. Clegg’s vocals are also extremely versatile, he modifies himself as a vocalist to suit the style of each song.

Clegg chooses to introduce his album with a song called ‘It’s Over’ and in my opinion this is one of the more country-blues inspired songs of the album. Speaking in first person, Clegg tells the story of a failed relationship and conveys emotions in which accompany a break-up. Lyrically, this song is well written. It provides some insightful metaphors and it efficiently conveys a sense of sadness and closure. The main guitar riff is appealing and a constant and simple drum beat complements this.

Once again, troubled relationships are the theme for the song ‘Don’t Care’. Personally, this is my favorite song on this album. It is quite simple (with only a few instruments being played) and its style reminds me of mainstream acoustic performer, Ben Lee. The vocal effect used on the vocalist’s voice in the chorus communicates a sense of inspiration to a listener and is a real asset to the song. Clegg also uses dynamics to his advantage through the way in which he plays his acoustic guitar. This particularly stood out in the pre-chorus of this song. For example, in the verse prior to this, Clegg strums his guitar in a hard and defined manor; however, this then changes to a relatively delicate volume and strum pattern. This really emphasizes the future chorus.

This is only a preview of what Derek Clegg has to offer. Like I said before, this album is extremely diverse and every song has its own identity. Check it out!