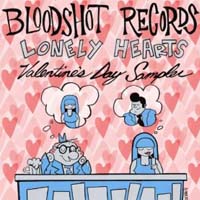 Bloodshot Records has just released their free 11-track love themed sampler, specially for this year’s Valentine’s Day. Don’t be fooled by the “Lonely Hearts” in title, the album is themed, but it’s not sappy or too lovey dovey.

It consists of mostly country tracks with one Rock-ish and one R&B-ish and features artists like Andre Williams, Ha Ha Tonka, Nora O’Connor and Alejandro Escovedo.

Here is the tracklist. If you would like to listen to the tracks before you download, head to the Amazon page to sample the Sampler.

Number 3 on the list is definitely our favorite, but maybe only because it’s more R&B than the rest of the tracks. If you like country though, you will love this free download.

BLOODSHOT RECORDS is an independent record label based in Chicago IL. “Since 1994, Bloodshot Records has championed the music that lurks between genres. We’ve always been drawn to the good stuff nestled in the dark, nebulous cracks where punk, country, soul, pop, bluegrass, blues and rock mix and mingle and mutate. We like artists who work over American roots forms with chains and velvet gloves with little regard for formality or protocol, who aren’t afraid to molest and caress these forms and take music into uncharted and exciting waters.”