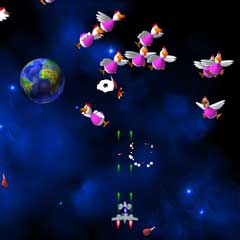 Chicken Invaders is a nicely designed arcade game based on the 80’s hit. The goal of the game is to defend the planet earth and the entire human race from the revenge hungry chickens from another galaxy. I find the concept hilarious – maybe that’s what makes the game much more enjoyable than shooting at regular spaceships. In order to pass levels and win the game you need to fire as fast and as precise as possible to kill the fighter chickens and see only drumsticks falling from the sky. And whatever you do – never touch asteroids or eat the eggs!

Features:
* 1 or 2 players — play alone or with a friend!
* Increasingly difficult waves — how far can you go?
* Boss levels — watch out, these chickens are serious!
* Weapon power-ups — advance your main weapon through 8 power levels! Collect missiles, too!
* Internet high score tables — compare yourself with people from all over the world!