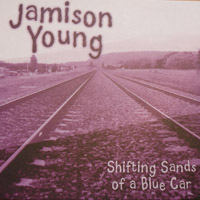 Jamison Young is a rock live performer who for a while now has been singing and writing songs only licensed under Creative Commons. Nowadays, he enjoys playing concerts in different places across Europe, as he is based out of Prague. Last year a song from his latest album, Shifting Sands of a Blue Car, was included in the soundtrack to the The X-Files: I Want to Believe movie. Jamison Young likes to listen to songs from a few decades ago, as well as from contemporary Creative Commons artists. According to him, the songs he likes are those that he “can listen to again and again yet still stay fresh.”

As an independent artist, he himself distributes his music through Jamendo, Myspace, Last.FM, Facebook, and Youtube. Aside from allowing free downloads of music, he is also open to getting them remixed–with permission and a duly important CC license, of course.

The songs in Jamison Young’s albums range from pop to country songs. I personally found myself attached to songs like How Far and Crush. I initially thought his album was filled with mostly alternative pop songs–until I listened further and discovered songs like Cold World and Live on a Moon. These songs, in contrast to the first few alternative pop songs in the album, have a country genre taste about it.

Like most indie artists, the genre Jamison Young works under is difficult to categorize–which is a certainly a delight to know. This just means that listening to his 18-track album will be anything but boring and dreary.

The album was produced with Peter Wells, Tim Powles & Antonio Dixon. Yet was mostly produced via the blood, sweat and tears of Jamison Young.