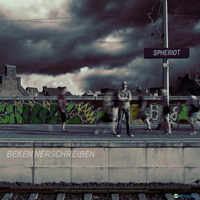 Spheriot “Bekennerschreiben” – techno and hard rock mashed up with indie pop, in English and German

Behind Spheriot is a one man bad who literally does everything – from the composition of music to the recording of all his songs. The result? A provocative album entitled Bekennerschreiben. According to the singer and writer himself, all of the songs in the fourteen-track album is a result of music from the heart and head. They were all produced in Spheriot’s living room. For someone who just toys around with his Mac, Spheriot was able to impress with his surprisingly refreshing take on music.

You don’t have to worry about having a hard time understanding Spheriot’s songs. Though he’s currently based in Cologne, Germany, he’s very much fluent in English. In fact, a lot of his songs in the album are in English—and with surprising depth at that. Try listening to The Golden Circle and Blind Ride to get a grasp of just how his songs can be infectious.

What’s also interesting about this man is his view towards expectations: he has none! That’s precisely why he expressly states that as a musician, he’s not trying to fulfill anybody’s expectations. He’s the type of artist who’s arguably gone through it all: involvement in many long gone bands, the dreams of making it big, the struggle to get make that creative song, and all sorts of trials.

In the end, all he needed was his Mac, his guitar, and his love for song writing. Perhaps it’s easy to say that Bekkenerschreiben is the culmination of his hobby as a musician: an album that fits the category of Indie Alternative Rock.