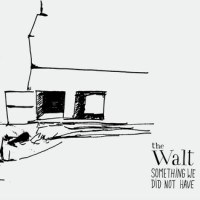 The Walt – Something We Did Not Have

Solid indie pop rock band that incorporates shouty vocals with dancy rhythm. The Walt is the product of former band We vs. Death, Kismet and Dawn of Awakening.  “Something We Did Not Have” is their latest EP and a mixture of loud indie punk rock sound that gets anybody up and about.

Something we did not have is the quartet’s first EP after playing for 4 years together. Recorded under indie label, Beep! Beep! Back Up The Truck, all 5 tracks are available for free download under a creative commons license.

If you are into plenty of head bobbing and loud indie/punk rock, take a listen and enjoy.The Walt is frontman/bassist, Johan Nijhoff; Sacha van den Haak, backing vocals/guitars; Wouter Kors on guitars and Boudewijn Rosenmuller on drums. “Something We Did Not Have” is a mix of new and old material recorded by the band in Mailmen Studios.

The band is described on their site as a band that works “based on a personal chemistry, geographical convenience and a shared passion for bands like At The Drive In, Medications, Q and not U, 31Knots, Me Without You and many others.”

With such interesting influences, the band definitely manages to channel some of their heroes onto their sound. Something we did not have contains 5 loud punk/ indie rock songs that makes for perfect full-volume blasting. The vocal work is reminiscent of then vocalist for At the Drive-In, Cedric Bixler-Zavala. The guitar work and arrangement is typical for any alternative punk rock act, but The Walt certainly brings something to the table.

Tracks like Zur Biederburg is catchy and hard to ignore while the jangly guitar work recalls earlier versions of the Kaiser Chiefs. Happily Ever After showcases wailing nasal vocals (which is oddly not as irritating as you normally would assume) and a great dancy beat.

As of the moment, the band is in the process of writing and recording their full length debut. Let’s all hope that it’s as good and promising as this EP.