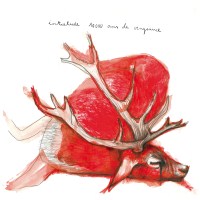 Hardcore emo rock that starts and ends with lots of Spanish shouting. Although its often a bit challenging to absolutely love a song sung in a language you don’t know, there are special tracks and albums that transcend beyond the language barrier. Interlude’s 1000 ans de vengeance is certainly one that you can mark down on that list.

Listeners who love hard core post- rock that borders around emo and screamo will definitely find this album a delight regardless of whether they understand Spanish or not. The compilation showcases 7 loud rockin’ tracks that are great for head bobbing and air devil horns.

Interlude is the result of a combination of band members from Criatura and Nevergood. The group recorded their first couple of songs, which were included in the EP 7″, back in 2005. From there, they recorded 6 more songs that became the basis for their Les Miserables album. Both of these albums were released almost consecutively back in 2006. To rally more support for their albums, the band also did a brief summer tour to promote their album.

1000 ans de vengeance is their third release. The recordings were done at the Ultraminos Costa Brava as well as the Montreal Studios, the same two studios for their previous releases. The album compiles 7 powerful tracks; all exhibiting characteristics of Interlude’s heavy rock emo sound.

It opens with “De vuelte a tu origen” which showcases soft  guitar and drumming work then builds up to a crescendo and a rabid mixture of screamed-out lyrics and loud drumming. “El valor de otra ocasion perdida” opens with lyrical belting, it’s almost like having rocks (in the form of words) getting thrown at you. Not completely sure whether this is a good thing, but in this case, it works just fine.

With Interlude’s current sound, it’s not difficult to see traces of post hardcore rock greats, At the Drive-In. Hopefully the group will be able to define their music more and continue to create great sound.

This work is licensed under a Creative Commons Attribution-Noncommercial-Share Alike 2.5 Spain License.