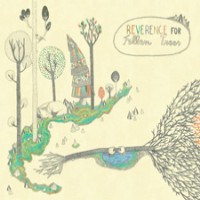 Surreal acoustic folk pop that reminds you of being completely lost in the woods yet feeling happy. Groningen based group The Black Atlantic has finally released a full length album in follow up to their Send This Home EP.

Released back in August 2009, Reverence for Fallen Trees has been receiving praises and great reviews left and right. Recorded and created in a log cabin somewhere in the Adirondack mountains, the album is a dreamy, fragile and sweet acoustic folk pop that makes sweeps you from your feet. All 10 tracks are crafted to embody harmonious vocals, sweet strumming and makes you feel warm and fuzzy inside.

Perhaps one of the most intriguing bands of the recent months, The Black Atlantic has certainly released an instant favorite with Reverence for Fallen Trees. The album title is a metaphor for “honor the dead” which was used in reference to the van der Velde’s grandfolks who passed away in the year before the release of this album.

Dwelling on soft, acoustic folk pop with shimmery guitars and minimalist percussions, Reverence for Fallen Trees is the perfect soundtrack to a night cap. In reference to the loss in the family that Geert van der Velde experienced, the songs tackle different emotions such as love, disenchantment, grief and family. Each track either explicitly discusses the topics or presents it in a beautiful metaphoric way.

From the quality of the recording to their online presence, not to mention their great music, these guys certainly are doing everything right. Up next, they’ll be busy playing gigs until August 2010, as stated on their Myspace site. Why not catch a glimpse of them as they visit close to your town?